How does a wipe become a cleanroom wipe?

Among the common cleanroom consumables that are used on a daily basis in cleanrooms, cleanroom wipes play a leading role in terms of relevance and consumption quantities. When using consumables for critical environments the knowledge of the contamination behavior of these products is of crucial importance. Due to the proximity to the production process or the product itself, specifically the airborne particulate contamination emanating from the consumable product are of concern. Therefore, all cleanroom wipes must be examined and evaluated regarding their cleanroom suitability and thus their particle emission behavior.

But how to translate these regulatory requirements into practical testing and tangible results? In the following, we will try to make this complex topic easier.

The goal of safe production under “clean conditions” is countered by the release of particles on to surfaces and to the air by cleanroom equipment and consumables such as cleanroom wipes. The cause of this emission, which needs to be controlled, is on the one hand the wipes material construction and on the other hand the mechanical stress it is exposed to. Even a simple and appropriate use of the wipe on a surface causes abrasion and as a result, particle generation and emission. By the way, this is also the case regardless of the sterility of the wipe. In fact, the usual sterilization by means of gamma radiation can lead to additional stress on the wipe.

the wipe properly, it must be folded, soaked with a cleaning agent or disinfectant and finally brought into contact with the surface to be cleaned. It does not magically attract the particles but has a cleaning effect when the fibers and the woven or nonwoven structure interact with the surface to gather and bind particles. Cleaning efficiency describes how much of the soiling on the surface before cleaning is removed by the wiping process. Wiping therefore inevitably involves friction, which in turn releases particles at a higher or lower level.

In conclusion, the design of the wipe must be selected so that it has the lowest possible particle emission and the highest possible cleaning efficiency under the conditions of usage. Therefore, cleanroom wipes are made of synthetic fibers and are processed in such a way, that they are as chemically resistant and abrasion resistant as possible. When selecting nonwoven wipes, particular attention must be paid to their material composition as well as the bonding and finishing process. Very few commercially available nonwoven wipes are suitable for critical applications under cleanroom conditions.

The following factors (among others) influence the cleanroom suitability of wipes: 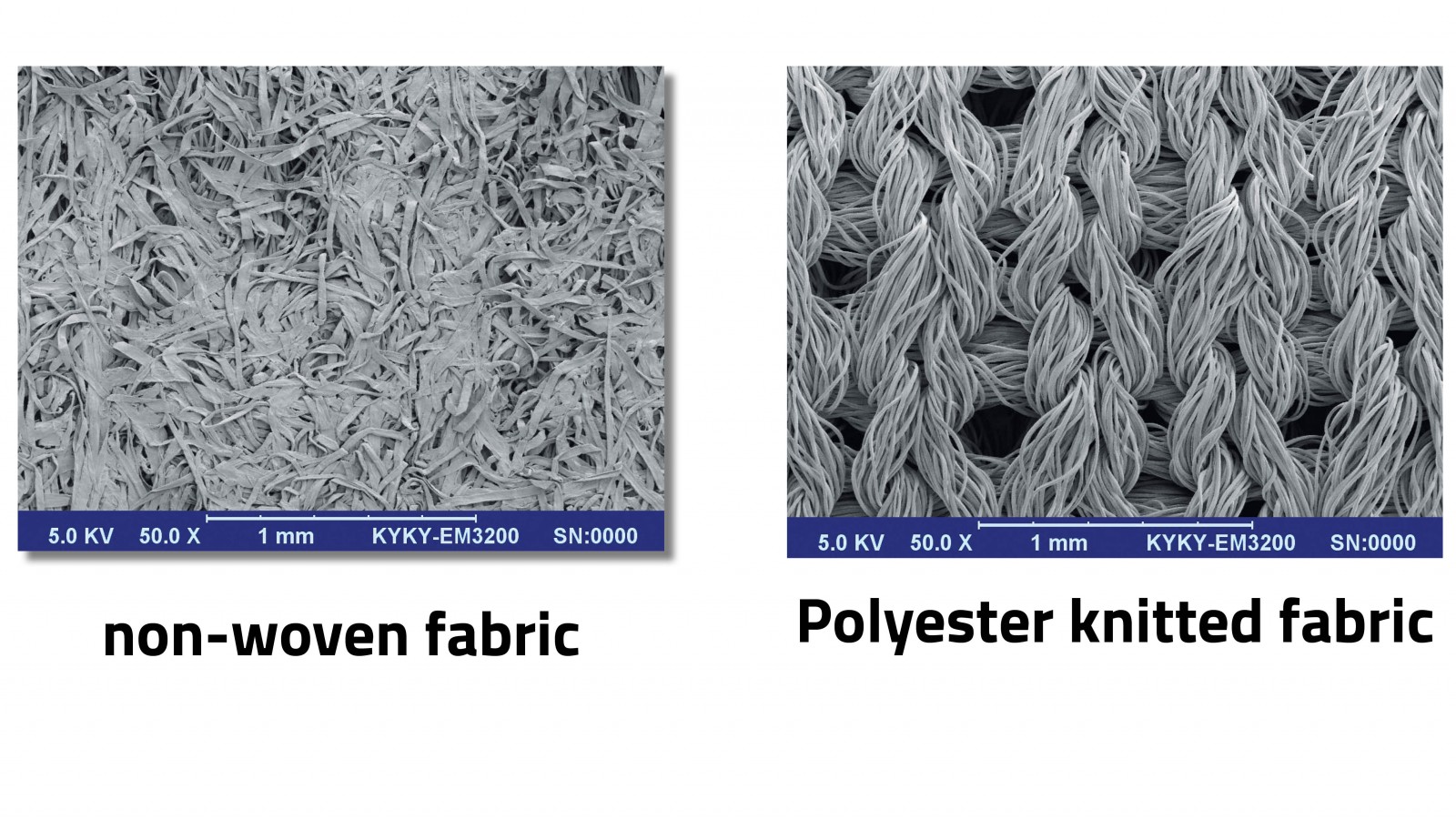 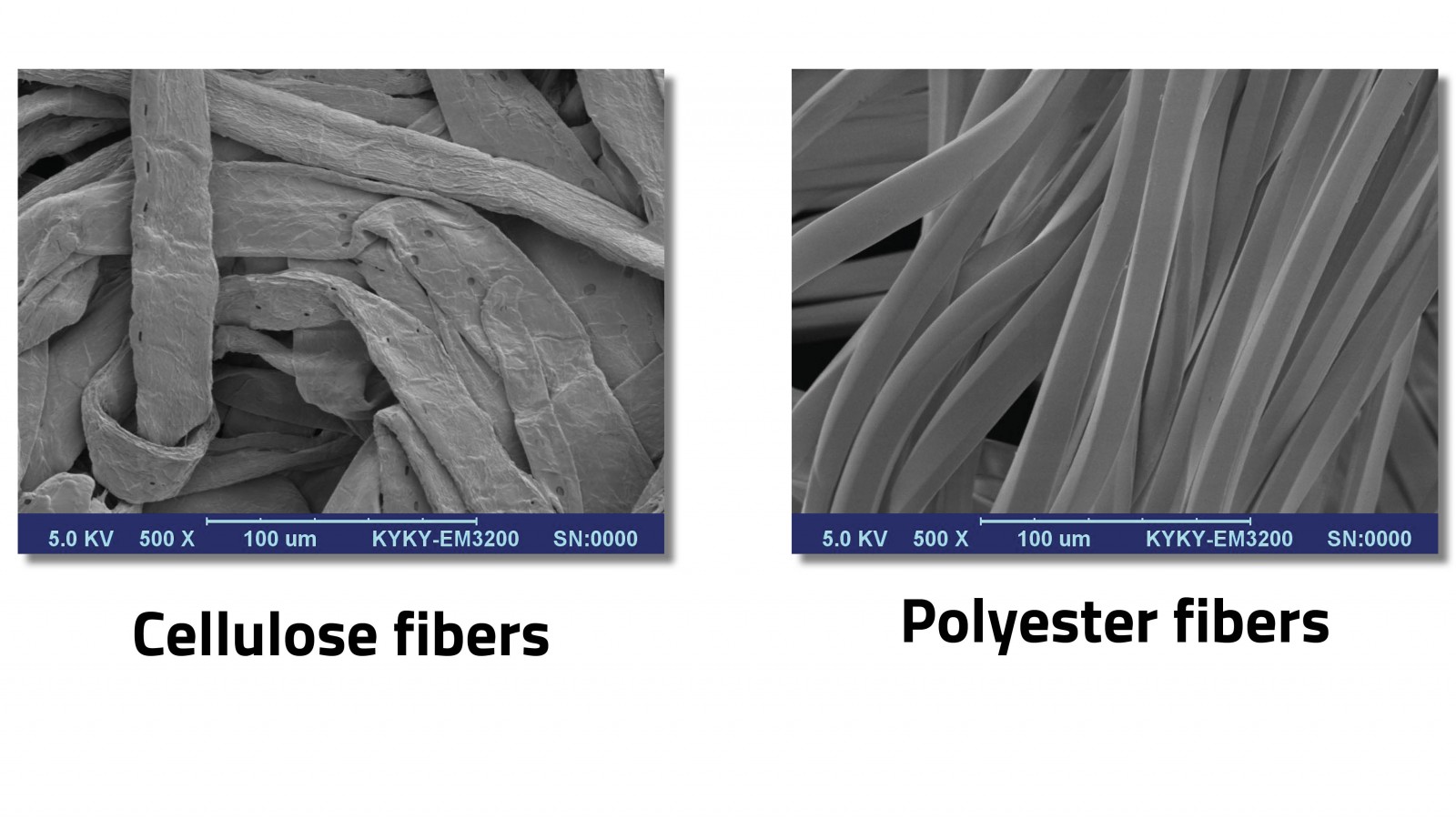 Assessment of the PurWipe® wipes at the German Fraunhofer Institute

The "particle problem" only becomes apparent at a closer look. More specifically, it becomes clear that the problem is not visible, at least not to the naked eye. The enemy “particle” passes the human eye largely undetected. So how to evaluate? How to make sure my wipe is actually a cleanroom wipe?

Clearly, test instruments and valid testing standards for measurement and qualification must be used. Tests for particle emission of wipes are usually carried out and documented on a batch specific basis by the manufacturer. While this is an important tool in quality assurance, this does not mean that the wipe is specifically assessed as being cleanroom suitable, and certainly not by an independent body.

In order to determine whether a wipe is suitable for use in a certain cleanroom class due to its particle emission behavior, an assessment of the suitability for air cleanliness classes according to ISO14644-1 must be carried out.

To evaluate and qualify the wipes of the PurWipe® series, Hydroflex has performed testing at the renowned Fraunhofer IPA, an independent public research institute specialized on cleanroom production environments. The tests were carried out in the competence center for ultra-pure and micro-production in a class 1 cleanroom (according to ISO 14644-1). A special testing instrument based on the specifications of ISO 9073-10 Analysis of fiber fragments and other particles in the dry state” was used for the measurements. A particle counter with a measuring probe was positioned below the test object, during which it was exposed to a defined mechanical load. The qualification measurements were also carried out according to the new guideline VDI 2083 Part 9.2. The particle measurements were evaluated in accordance with ISO 14644-14. 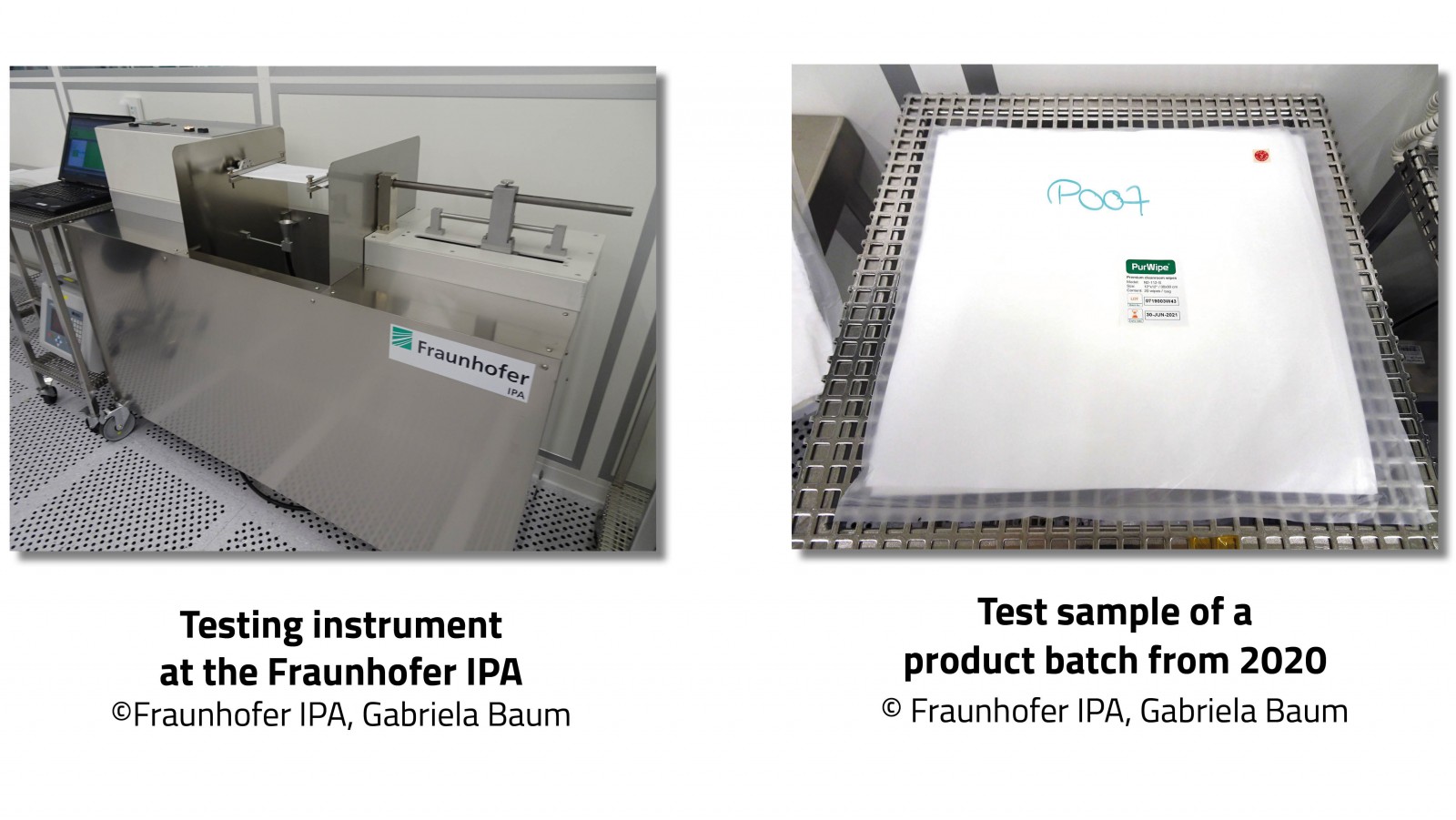 At the heart of the investigations was the question, to what extent the PurWipe® wipes can be used in clean environments and in which cleanroom classes. To classify the wipes, the measured particle values were statistically analyzed and evaluated with reference to the class limits specified in ISO 14644-1. Of all test samples, the “worst-case”, i.e. the worst result, was used for the classification.

The independent testing of the wipes at the Fraunhofer IPA Institute confirms: PurWipe® N2, K1, K3 and K4 are suitable for cleanrooms up to ISO class 4.

Due to the high quality standards in the production of the PurWipe® wipes under cleanroom conditions, as well as the development of the wipes specifically for the high requirements in cleanrooms, these wipes enable safe use under clean conditions, while uncontrolled particle emissions and a risk to the cleanroom status are avoided. With the qualification certificate from Fraunhofer IPA and the “Tested Device®” seal for PurWipe® wipes, an independent proof of cleanroom suitability is provided, which is an important part of product qualification.